Taken inside Sonya's Garden. There are several pots in the area that carries floating flowers. I love the combination of yellow and pink in these sunflower and gumamela :) 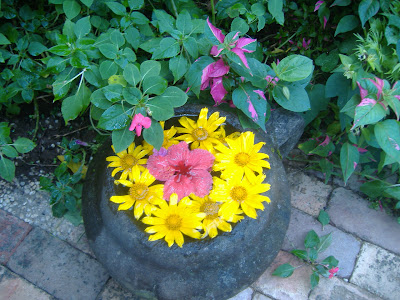 
My entry for Watery Wednesday, pond full of koi fish.
I saved these pictures of our Tagaytay trip for WW. These photos were taken in Antonio's Tagaytay :)

December 11, we woke just before dawn. That's one thing about having kids, your body is trained to wake up   so early so even if we were not with them, we were already up by 530am.

This is the highlight of our trip, breakfast at Antonio's! The place was really grand and majestic with white high ceilings and walls and dark wood furnishings. Feels like you're in a Mafia movie hehe.


The breakfast menu were all enticing, it took us a while before deciding. I ordered french toast with bacon on the side and hot chocolate while Stephen ordered Antonio's burger with extra egg and cheddar cheese and their house blend coffee.
I tasted the hot choco not really expecting anything but when the hot liquid touched my tongue, I was in heaven for 5 seconds. The chocolatiest and creamiest hot drink I ever tasted :)
After breakfast, we headed to Good Shepherd to ube halaya (purple yam) and atsara (pickled veggies). Oh, you have to try their atsara, so good with combination of sweet and sour! Of course, Good Shepherd boasts of their ube halaya which is just enough sweetness.

On our way back to Sta. Rosa exit, we passed by this place. After seeing the huge Our Lady of Manaog statue, we decided to stop over. We thought it was a church but it's more of a meditation area. It is quite a small place with so much things going on, there's a prayer room that holds different pocket areas for different types of prayer requests, there's a meditation garden (that's really not), there's a candle burning area and a fish spa. It's a place of sorts that somehow feels wrong, the prayer room has Santa Claus decors beside the cross, weird... and there's something for a sale everywhere. Somehow I felt sad, it's like God was used for business. After coming to this place, we went to real church to pray and feel the solemnity of a sacred place.
Posted by janakidiary at Wednesday, December 22, 2010 1 comment:

December 10, 2010. To celebrate our wedding anniversary, Stephen and I planned a trip to Tagaytay City. We decided to leave the kids in the care of my MIL and their yayas so that we can spend time together as a couple.

As soon as we got to Tagaytay City proper, we immediately looked for a place to stay the night. This is the typical us as travelers, we like spontaneity. Especially that we got there on a Friday, we were confident we can find a reasonably priced lodge. However, the OC in me still brought in our itinerary and a map, just so our overnight stay will not go to waste.
I found out about Keni Po while searching in the web for a cheap but nice lodging, so it was one of those places we searched. The others were just too pricey, we just need a place to spend the night because we intend to really make the most of our Tagaytay trip. According to the address, Keni Po is located in San Juan but not really familiar with the towns in Tagaytay, we had quite a hard time looking for it. After a while we just decided, 'let's look for that house we stayed in a few years ago'... but we don't know it's name or it doesn't have a name :( Anyway, when we finally found Keni Po, we realized it's the house we were looking for and we've been there before. What a coincidence! We got the room for P1,500.00 :) 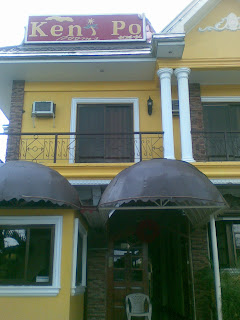 After checking in we decided to eat lunch. It's already 1pm and we were famished! Stephen could only think of Bulalo and so we headed to Leslie's. This restaurant is overlooking Taal Lake and the view is such a plus.
We ordered nothing else but Special Bulalo. Can you see the dish, it looks nasty, eh? But we were nastier because by the time we finished only the bone and soup were left. hehe.


Next stop, Bag of Beans! I was hoping to taste Alamid coffee but it's not on the menu anymore so I just orderred their house blend. Yum! Here are some of the photos I took in Bag of Beans. This placing is really relaxing.

Then off to Sonya's Garden we go! We got there a little late in the afternoon already. Strolled around the area, bought breads (the focaccia bread is superb, by the way) and took pictures, of course. 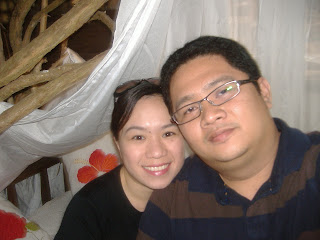 On the way out, it was getting dark already and this is what we found. Pretty! 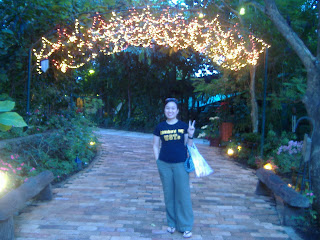 Sonya's Garden really has interesting little nooks and crannies. Downside would have to be the bugs and mosquitoes which got me all paranoid.

Our last stop for the night, Fat Bill's Bed and Breakfast. I also found this on the web to be a nice bed and breakfast but we found Keni Po first. Maybe on our next visit, we'll stay at Fat Bill's. That's exactly what I said to our very cordial and hospitable hosts, none other than Bill himself and wife Esther. Bill happens to be a master chef, worked for many years in a Dubai hotel before retiring a couple of years ago. They are residents of Tagaytay for decades, though.

Because we were still full from our late lunch and coffee, we decided to order booze and a light meal. I ordered King Ranch Chicken. It was delicious, more like our chicken pastel with added herbs and spices. It came with fries. Perfect dish to go with my San Mig Light :)

Best part of our Fat Bill's experience was that we met 2 guys, one from New Zealand and another from Boston. One happens to be a professor in one of the major universities in Manila. We had a very mentally stimulating conversation with them. We exchanged calling cards and hope to see each other again.
Unfortunately, we were not able to go back the next morning for their English Pies but I heard they're sumptuous.
This was out of our itinerary but ,on our way to Sonya's Garden, we found a sign pointing to Flower Farm  so we headed there. Now I remember this is the reason we reached Sonya's Garden late in the afternoon already. However, Flower Farm doesn't accommodate walk ins, you have to book in their Manila office prior to your visit.
Posted by janakidiary at Friday, December 17, 2010 3 comments:

Nokia C7, why do I love thee? Let me count the ways:
Oh Yes! I want to have the Nokia C7 for Christmas! J
Posted by janakidiary at Thursday, December 16, 2010 2 comments:

And I thought I have nothing to contribute to this week's Watery Wednesday.
I found this photo from my archive, one of those film-based photos which I just scanned for the soft copy.
This was inspired by the little girl walking along the shore as I was practicing my photography 101. One thing about film-based photography then is that you'll never know how you photos will come out. 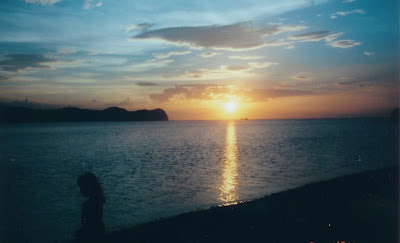 see other amazing photos in http://waterywednesday.blogspot.com/
Posted by janakidiary at Wednesday, December 15, 2010 9 comments:

Part of Sam’s sleeping pattern is that he wakes up between 3am and 5am asking for his milk. He used to say ‘Mommy, mamam’ (mommy, drink). I would then offer him a bottle of water and when he says ‘no’ it means he wants his milk. Now, he can already say ‘gatatsh’ (gatas or milk). Sometimes I’m confused if my son is foreigner or Bisaya, he says things differently.
Anyway, a few months back, he was asking for milk in the middle of the night. I was too tired and too groggy that I knew he was calling me but my mind is still in dreamland. In short, I slept on him for like a minute. When I finally woke up, I saw him propped on a pillow, eating his milk with his bare hands, like rice! Somehow he found a way to open his milk dispenser, there was a mound of milk in front of him and he was licking the palm of his hand full of milk. I know I should’ve taken a picture but I was laughing so hard I forgot! You should see his face, though, it was like he was in heaven, he was in pure bliss! lol.  His legs and arms were covered with sticky milk but he doesn’t mind.
It took a while before I cleaned him up and the bed of his milk.
Moral of the story, immediately heed to your child’s request for food or else… he’s gonna do it own his own J
Posted by janakidiary at Tuesday, December 14, 2010 No comments:

Email ThisBlogThis!Share to TwitterShare to FacebookShare to Pinterest
Labels: sophie and sam 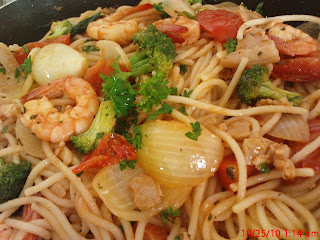 I don't frequent Cubao because I find the area too crowded for me. I would usually go to that area to watch a concert at Araneta Coliseum. Then two weeks ago I had to go to Farmer's Market for an errand and after accomplishing my task I decided to stroll around the vicinity and I found Shoeville! This shoe store has been in existence since the 70's. It's actually called New Shoeville now. I looked around the store hoping to find something interesting and cheap. Well, whaddaya know? I found this pair of white shoes. I have looking for a pair of (kinda) flat shoes since almost all of my collection is 2" and above. This comfy pair is P325.00 only, not bad eh? 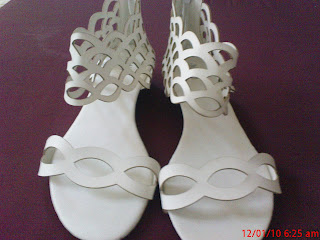 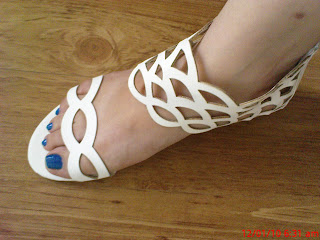 Posted by janakidiary at Monday, December 13, 2010 No comments:

December 10, I woke up to fresh new day. Jumped off a king-sized bed, drew out heavy curtains and said ‘Good Morning’ to a perfect morning. I was as giddy as a child who got her Christmas wish. Then I said a silent prayer , 'Lord, I surrender this day to you. Stephen and I did all the best we can, You do the rest. Your will be done’. That was exactly 5 years and 3 days ago, the day of my wedding day. 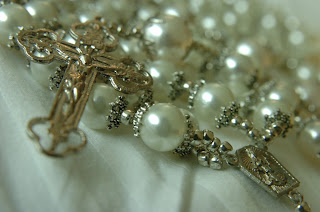 Preparations went well at the hotel and according to schedule. Everything was going perfectly well until I  reached Kasalikasan. As I was about to step out from my red bridal car, trickles of rain went down on our garden wedding/reception venue. Yes, we had (or supposed to have) a garden wedding with a blessing from the Archbishop’s Palace because the chapel we reserved did not finish construction in time for the wedding. It literally rained on my parade :( 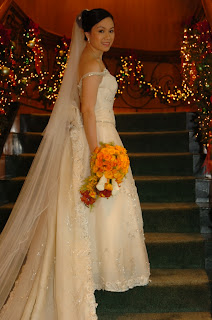 When it was my time to alight from the car, I was all smiles to see that most people I put on my guest list were still there in the gym waiting for the wedding to start. These people are the people that Stephen and I hold dear and I’m happy they thought we were special too to stay despite the mishap.Of course, I understood those who couldn't stay anymore. At the wedding march, I got a round of applause from all the guests. I guess they were just happy the ceremony finally started :) They say it's rare for a bride and groom to stay focused and calm even when things during their wedding go bad. The thing is, there was not a slight worry on my mind during that time. I was literally in cloud nine! Funny but after the wedding I just thought, well I surrendered everything to God, didn’t I? I know after that moment with Him, I just gave away all worries, all doubts, all concerns and surrendered my wedding day to Him. Que sera sera, according to God’s plan.

Posted by janakidiary at Monday, December 13, 2010 No comments: