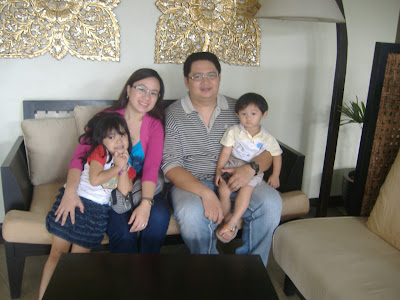 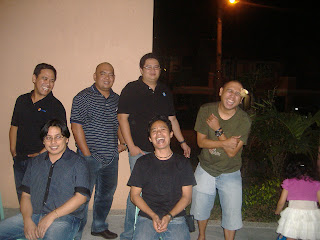 Here they are now with the wives and kids during a post Christmas party/1st ever reunion at our house. 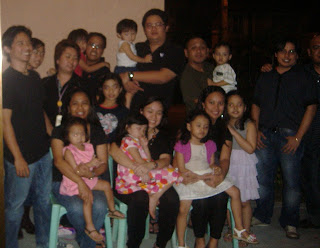 Happy MM to everyone : )

This year, I’m thinking of something new to learn. That’s one of my yearly goals, to learn or do something new every year. I actually got more serious about this goal after I got married. I know that having a family should not be a reason for me to stop growing as an individual. I have a problem with keeping still, for one, that’s my weakness at some point I guess. I am impatient if I don’t get to move around.
Last year, I got more serious into blogging and learned about bloghopping, joined memes and all. Although my blog has been in existence since 2008, only last year was I able to learn more about the blog universe and I’m so thankful for everyone and everything that I learned along the way. Last year was also my first time to join Fun Runs. I was able to join two and those were totally new, invigorating and very healthy experience for me. I plan to continue doing runs this year.
Another first for me last year was learn how to drive. I could say it was more of a challenge for me thinking that maybe someone else can drive for me (wishful thinking)? But I thought, better now or never. It took a while before I can truly appreciate this new skill especially with the horrendous traffic and road condition here in but somehow I appreciate the thought that I now have a license and I can drive a manual car J
There are other minor firsts like refurbishing a coffee table, learning new recipes which I also shared here,etc. so this year I know there’s more in this world that I can learn and discover, like firedancing perhaps? J I’m so amazed at the hand and body coordination and artistry of fire dancers. They’re so graceful. I also want to try a new sport that's inexpensive and fun. My first love is bowling. I compete but I'm no Paeng Nepomuceno but bowling centers here in Manila are a little hard on the pocket especially if you try to do it once or twice a week so I'm not regularly bowling (and I miss it so much). I'm also looking for a new sport that I don't have to bring someone else so I can play. I remember Miriam Santiago sharing in a casual interview that the reason she got into swimming is that she can enjoy the sport without the need for a playing partner.
How about you, what something new you want to learn or experience this year?
Posted by janakidiary at Thursday, January 27, 2011 2 comments:

Looking for a different subject for this week's WW, I photographed the drinks served at a wedding we attended last week at Blue Leaf in Fort Bonifacio.
Congrats and Best Wishes April and Arnie! Thank you for making us part of your special day :)
Posted by janakidiary at Wednesday, January 26, 2011 8 comments:

Okay, it has been a while before this part 2. Sorry for that, got so busy with a major project and shoots.
Anyway, here are more photos of our Baguio trip.

Mines View Park
For P10/pax, they will dress you up in Ifugao costume for a photo souvenir.
Tam-Awan Village

The highlight of my trip to Baguio, going up to Tam-awan village in Pinsao, Baguio City. Tam-awan means 'vantage point', apt name as one can see South China Sea on a clear day. Not for us, though, it was a foggy afternoon when we came. For a mere P50 per head entrance, you get to experience getting in the Ifugao and Kalinga houses, get really high with our very own arts and culture.

You can also sit down for a sketch session with their available artists. I think it's P200 per head. Yup, were in a hurry so maybe next time. The thing is, we took the wrong and longer route to Tam-awan. Here's a tip if you plan to get to Tam-awan: from the City Hall, make sure you will pass by Naguillan Rd. If you miss Naguillan Rd and reach Ipil-ipil Rd. then you're going the long cut. Anyway, more interesting arts and artifacts inside the village: 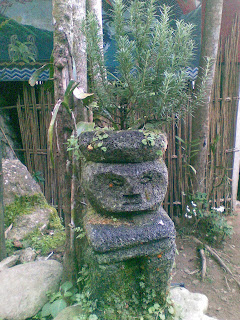 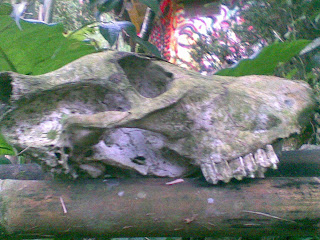 Email ThisBlogThis!Share to TwitterShare to FacebookShare to Pinterest
Labels: baguio 2010

Sophie and Sam were invited to a birthday party in Plaza Ibarra, QC. One of the many activities during the party was the bubble show and this bubble pool where kids can experience being inside a giant bubble. Bubbles are always a hit with kids :) 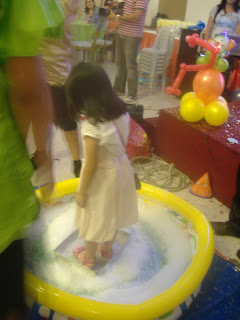 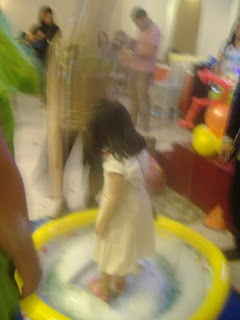 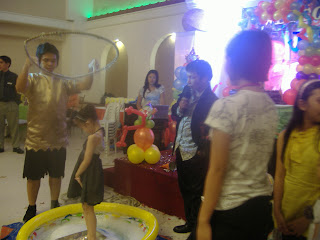 My husband's family made it their yearly tradition to go up to Baguio every December. For one thing, his brother who's now in London always requests for Baguio trip everytime he comes home in December. I guess he just can't take the hot weather and smog of Manila. And everytime, the Ayala Cottage is the place they stay  in which is walking distance away from Mines View.
Last December 2010 was only my second time to go with them due to schedule conflicts. The first Baguio trip with the Garcia's, we had this souvenir photo in the cottage (taken in 2008). I was 6months pregnant then with Sam :) 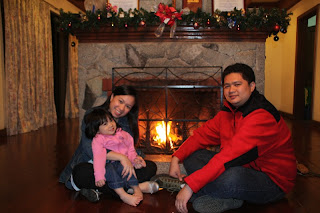 This year, we attempted to have a family picture by the fireplace but it was not as successful. Maybe next year. But I got these photos of the kids. Sophie and Sam got to spend 4 days with their cousins and, boooy, you can't imagine the chaos when 5 kids come together in one house! :)
Here, they found an empty cabinet as a nice hide-and-seek place... 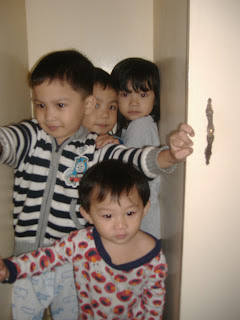 We requested them to sit together for a photo op and these are what we got. Yep, the only girl (named Sophie) turns out to be the most makulit. 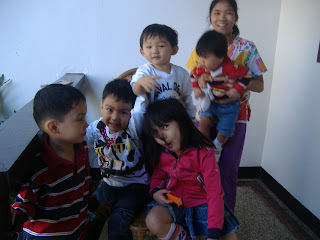 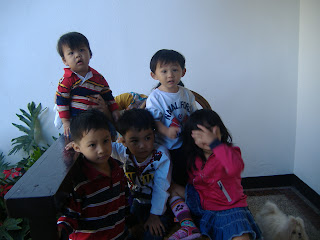 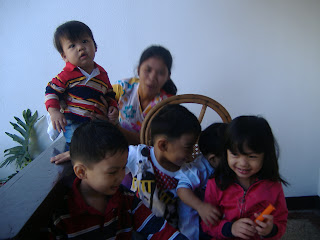 Day 2, we visited PMA after attending mass at Pacdal church. My husband was like a little kid in a playground when we got to the tanks. He is truly a war stories fanatic, can't count how many time he watched Band of Brothers and his collection of dvds ranges from the black and white to the most recent. He also loves Stephen Ambrose books.
Him and nephew Miggy on top of the Landing Vehicle Tank or LVT (an amphibious) tank: 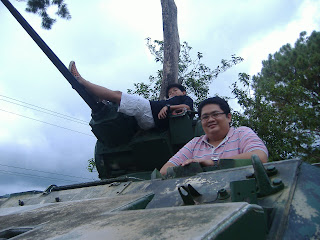 Of course, Sam had to try going up the tank too :) 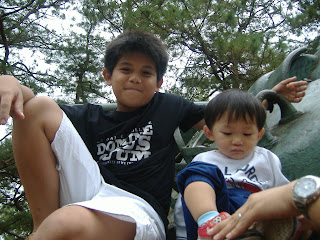 Mama Karol (my MIL) and Tita Chit beside the Korean monument: 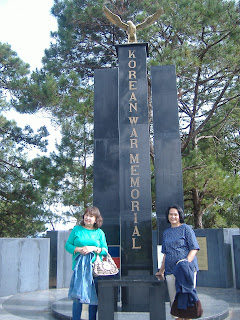 I tried to find an interesting POV for my photos and I found one, the top of  a 19th century Howitzer's gun barrel: 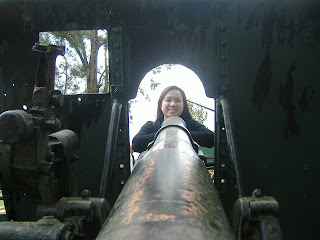 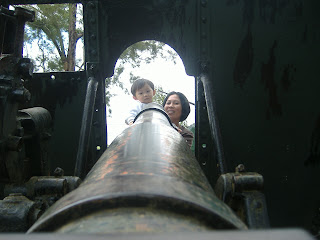 Will we ever forget a family picture? :0 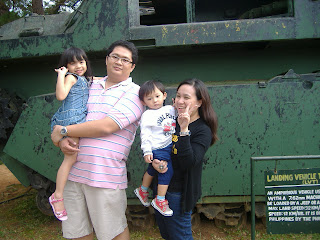 After which, we went inside the PMA museum. For a mere P10 entrance per head, you can already get in. Look what we found? Stephen's grandad's class picture of 1943. My husband said, of the many years they went to Baguio, this was the first time they've been to the museum and seen his lolo's class picture. Nostalgic :) 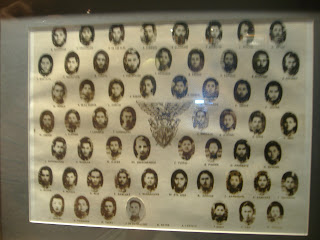 Other interesting things to see in PMA grounds :

We still had time to visit the pet cemetery in Camp John Hay before we head back for dinner.


More of the Baguio trip next time :)
Posted by janakidiary at Wednesday, January 12, 2011 3 comments: