Sophie, being the older child, is already taught that whenever we go to the mall, going to the toy store is okay but it doesn’t automatically mean they l bring home something from the store. Especially if the price of the toy is not cheap for an impulse buy and if mommy says, ‘too expensive’ or ‘not in our budget’, she knows that it l never be purchased for her and that it’s time to look for something that mommy l pay for. She never insisted because it never works for the thrifty mom.
However, one weekend while we were looking for a gift for an inaanak, Sophie saw once again her most desired toy, the Smart Cube. She is so amazed by this toy that she would visit the booth everytime we go to a toy store. But I never bought her that toy because it was expensive based on thrifty mommy’s point of view. Until-
“Why are you carrying that”, the thrifty mom asked
“Buy ko ‘to”, the little girl replied while clinging dearly to a box of Smart Cube.
“We don’t have budget for that. I said no buying today, di ba? Return that”, I insisted
“eh, binigay sa akin ‘to ng mama (referring to the promodiser)”
“Not because he gave it to you means you’re not gonna pay for it.” I replied.
I was supposed to go to the promodiser to give him a a piece of my mind but then again I thought, this is the nth time that Sophie asked me to buy her that toy and I think it’s a nice toy. So I finally gave in. The thrifty mom who wouldn’t spend more than 100 bucks for a non-occasional toy finally gave in.
Anyway, I’m glad na rin that I bought cubes. Even Sam enjoys the cubes and can already create different figures on his own (if he is not destroying Ate's work). Sophie, of course adores her new toy. I think she was able to finish all figures that the basic set can create.She wanted to move on to the more complicated figures but we need to buy another set for that.
This toy is really educational, enhances the thinking and imagination skills of kids. Very ideal for toddlers to practice their motor skills. If they're tired of building, Sam make it into a basket where he shoots his small rubber balls. 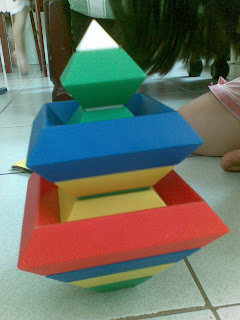 kids are so adorable at this age...

this is fun, reminded me of rubic's qube

that was new, I have not seen that one before. :)

@jocojocolcol - thanks for visiting :0
@lily riani - yes, this fun. even I enjoy it!

@ naturefootstep - new and exciting for kids and adult alike :0